Our Sense of Place- A Brief Historical Perspective

Before the incursion of man there was the River.  Although impeded over time by man, the Green River continues to flow even as you read this passage.  The mainstem of Green River is akin to the human aorta, pulsing with life-sustaining flows, bringing nutrients and oxygen-rich waters downstream and occasionally leaving behind productive sediments in its floodplains.  The main trunk is supplemented along its length by numerous tributaries with names like Russell, Pitman, Brush, Little Barren, and Lynn Camp.  Further downstream deep arteries never see the light of day until reaching the River via springs such as 300 Hundred Springs (below right), Gorin Mill from Hidden River Cave, McCoy Blue Hole and the Echo River of Mammoth Cave.

The rich bounty of life brought forth by the Green River, including vast mussel beds and fish as well as dense bottomland forests, must have seemed like a fertile crescent to aboriginal and pre-historic Native Americans who worked along its banks, collected mussels and hunted its forests and associated fields (1).  Remnants of this activity is present in caves and shelters even today although, sadly, many such sites have been destroyed or pilfered by collectors, these treasure troves of information sitting in a box or under a layer of dust in silence.  Early European explorers in the mid 1700’s described the valley of the “Rio Verde” as “the most magnificent broadleaf forest in the world”. Maintained by fire, both natural and by the hands of man, the barrens region was described by French botanist Michaux as the “Great Kentucky Meadow” (Jim Aldrich, pers. comm.)

What a welcome sight the rolling hills and karst plains surrounding the upper Green River must have been to weary settlers emerging from the Appalachian and Cumberland Mountains after traversing the Wilderness Road!  Early records of settlements like the Longhunter’s Camp Knox were a testament to the area’s abundant natural resources.  Other settlement’s followed including Glover’s Station (Greensburg), Vance’s Station, Pittman Station and Munfordville (1).  In spite of logging and land-clearing for homesteads and agriculture, as well as massive hardwood harvests to support an iron ore industry, John Muir’s mid-1800’s visit to the region on his famous walk to the Gulf of Mexico prompted him to comment on the beautiful springs and impressive oaks in this slice of Kentucky (2). Early investigations of this area in the mid 1800’s as a potential route for the Louisville and Nashville Railroad described the land as being “embraced within rich timber belts and iron ore” (3).  Accordingly, there were numerous grist and lumber mills like Montgomery Mill at the Narrows of Pitman Creek or the 300 Springs lumber mill (see below).  These mill sites are just remnants today, much like our vast mature forests of yesterday.  Today, truly mature forests are literally few and far between in the upper Green River.  Sites such as Wyatt Jeffries Woods (aka Exie Woods), Glen Lily, West Wind Farm and others are a testament to families and individuals dedicated to sustainable forest management with an eye towards the future. 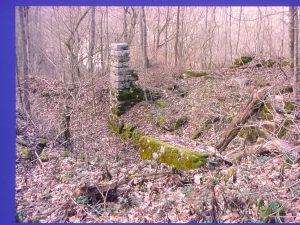 Remnants of the 300 Springs mill.

An unfortunate consequence of unsustainable land use has often been erosion and excessive sediment deposition into the River.  This process is often recognized today as old timers reflect on the disappearance of deep pools in the Green and its tributaries. Sediments that have deposited in some of the pools of these aquatic arteries are akin to cholesterol building in one’s circulatory system.  This excess sediment alters habitat and degrades the river for both aquatic animals and humans.

The River has not only transported sediment but has also long served as a source of transportation for people and goods whether moving agricultural products downstream or steamboats up the Green bringing visitors to famous Mammoth Cave via a series of locks and dams (below left). 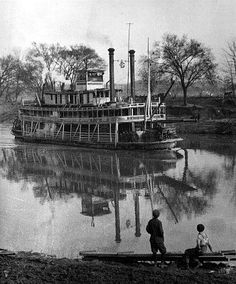 BG steamer on the Green River.

Green County historical records indicate that in 1821 one warehouse alone shipped over 500 hogsheads of tobacco down the Green on flat bottom boats! (Betty Jane Gorin-Smith, pers. comm.; see below)  Flat bottom cable ferries were a common site all along the river providing what must have at times seemed like a harrowing passage to the other side.  Operators would charge a small fee or often accepted barter in exchange for this valuable service. 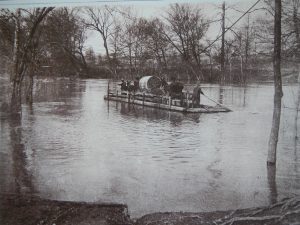 Today the river and its vast network of surface tributaries transports fishermen, squirrel hunters, kayakers and canoeists.  And, when not prevented by dams, the river has for centuries provided a transportation route for numerous migratory species to complete their life cycles including lampreys, suckers and freshwater eels (see white sucker, Catostomus commersoni, below- http://roughfish.com/white-sucker) .   Undoubtedly the construction of modern–day locks and dams has significantly altered the integrity of this phenomena (See Editor’s Note below).

Through the Looking Glass

Today humans continue to exploit the River and its associated lands but the balance between agricultural production and natural resource production and conservation is perhaps more balanced than ever.  Many farmers have begun implementing best management practices which help protect water quality (see Conservation).  Many forest owners choose to manage forests with sound stewardship not only insuring a steady crop of trees for future generations but also ensuring a functional landscape and the clean water benefits provided by those forests for the same future generations.  True sustainability of the Green River requires the industrialist, developer and city planner follow the lead of the conservationist farmer and forest manager. Project location, design and implementation must all make use of the best available knowledge regarding sustainable development practices so that degradation of the river is minimized.  As we constantly eye the future we must also be willing to look back and learn from our history.

So, can we have it all?  Is it possible to grow and prosper economically while maintaining truly livable communities with a clean and healthy Green River running through them?  It is a difficult but fair question and one that will most likely only be answered by our children and grandchildren.  One thing is certain- no community will be considered fully livable or whole with a polluted or otherwise compromised Green River running through it.  As important decisions are made regarding “smart” versus “dumb” growth and land development, the River must always be part of the discussion and must, at least occasionally, win.  But be sure that if future generations are able to realize the same benefits that this crown-jewel of Kentucky’s rivers has provided to us and our ancestors, they will have you to thank.  Roll on mighty Green, roll on. 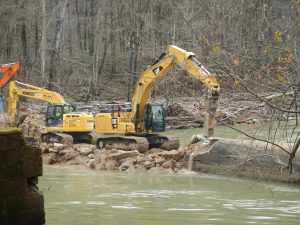 This action will restore several miles of Green River to a free-flowing condition within Mammoth Cave National Park as well as benefiting fauna within the cave system.  Future studies should confirm this.  While the lock and dam represented a rich history to many locals, its removal will provide benefits to river ecology, river fisheries, paddling enthusiasts and the local economy.