The eastern hellbender is also known locally as the “waterdog”.  Its native range includes the entire Green River drainage area.  The species is noteworthy as it is North America’s largest salamander, reaching up to two feet in length.   Although there is much to be learned about this secretive animal there are a few things known about its life history and ecology.  It is well-adapted to flowing water and this long, flattened amphibian is often found living under large substrate and logs where it prefers to nest in the summer.  Its short, powerful legs and strong tail enable it to exploit habitat and establish nest sites. Unlike its cousin, the mudpuppy, the adult hellbender possesses no gills and relies on its skin and lungs for respiration.  A mucous coating may protect its skin from disease.  It has most frequently been observed to consume small fish and crayfish. 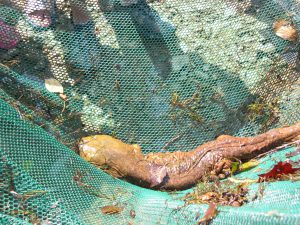 This nearly 2-ft Green River specimen was captured in 2004 to the delight of students who had never witnessed the rare creature.

Unfortunately, the hellbender has been in a significant decline over the past few decades and is rarely encountered today.  Recent efforts by biologists to collect hellbenders from the upper Green River were unsuccessful.  They may have become so rare that the only method of detection may now be the presence of their DNA in local waters, a technique developed relatively recently.  Suggestions for the decline include habitat loss, disease and overharvesting.  Local people have long had a very negative opinion of the species, perhaps due to its ugly looks or demeanor or perhaps out of pure ignorance.  Many have been killed in the past due to perceived competition or predation on sport fishes or as a nuisance species for catfish enthusiasts who often hooked hellbenders on limb-lines or trot-lines.

Let’s hope the hellbender recovers so that we learn more about it and perhaps develop a new appreciation for North America’s giant salamander!

To learn more about this rare and secretive member of the Green River fauna, visit the Cryptobranchus alleganiensis iNaturalist page: