We often talk about how nature speaks to us.  Nature may speak to us in many different ways—it excites us, calms us, motivates us, wraps us in serenity, or even scares us.  It probably speaks to each of us in different ways—in this sense, nature is multilingual.

I am sure if Green River could talk she could tell us how for millennia she has cut through the valley, creating new channels, rediscovering old ones, and making habitats all the while. She could describe for us how, as she cut the valley, she also contributed to the formation of the world’s largest cave system.  Maybe she would tell us of how the most recent period of glaciation, several thousands of years ago, stopped just short of her doorstep, sparing her landscape and topography from eternal alteration and enhancing her potential for the great biological diversity found in her waters even today.

More recently, she might recall how early native Americans fished her waters or sought shelter in her caves.  Or how our ancestors shipped supplies down the Green to the Ohio, Mississippi and beyond.  She might remember the echo of gunfire as Union and Confederate soldiers battled for positions along her length including sites like Tebb’s Bend and Munfordville—or the echo of  a Kentucky rifle as a great-great grandfather harvested a squirrel from an overhanging sycamore limb. Maybe she would describe for us how our predecessors used to visit town by crossing her spine on a cable ferry at Greensburg.

She laughingly remembers having her ribs of Brush Creek, Little Barren, and Lynn Camp Creek and Russell Creek tickled by the splashing feet of the youth of yesterday.  However, the Green won’t hesitate to remind you that, in combination with her tributaries and in spite of efforts to control her, she can become a powerful force worthy of our respect in a matter of minutes.  She has caused communities like Greensburg and Munfordville to tremble at her rising waters more than once in history.  Her strong pulses have put life into our valleys by enrichening our soils for agriculture. Her force has powered the production of grist mills like the Montgomery Mill on Pitman Creek and Three Hundred Springs Mill on Green River. Even though she supports and sustains our life, she also is powerful enough to take it away.

As a mother proudly boasts of her children, she would also want us to know that she is home to the greatest fish and mussel diversity of any river system in Kentucky.  Why from Green River dam to Mammoth Cave alone, she is home to 109 types of fishes and nearly 70 different kinds of mussels, many of them exceedingly rare.  And you ought to see her basement!  Her underground streams contain some of the most unique and rare organisms on earth.  Indeed, if she were considered a house and her rooms habitats, she would be one of the freshwater mansions of North America.  A Biltmore of biodiversity!  We are fortunate to have so much to care about, so much to conserve.

As impressive as this sounds, however, she might also complain a little.  She has earned the right after all.  Green River might relay to us how she has become “stressed out” in recent times as our populations have grown along with our demands on the lands that border her.  She would tell us how we have littered her once beautiful cliffs with rubber tires, water heaters, or other modern “throw away” items. Or how we have polluted her waters in a myriad of ways and altered her flow and temperatures.  Many of her fishes (~14%) and mussels (~35%) are considered globally or locally imperiled, meaning the future is not secure.  I guess we could say she is a freshwater mansion in need of some repair.  Indeed, nearly fifty miles of her banks and bottoms between the dam and Mammoth Cave National Park are in need of some form of restoration.

Green River would also tell us that she is resilient.  Despite the stresses of mankind, upper Green River continues to support an amazing number of fish and wildlife species and a number of human uses. We must remember, throughout her history, this river has sustained herself with or without man (or due to his absence).  Alternatively, man has depended on her waters and will continue to do so throughout his existence.  Interestingly, although people have altered the river and threaten it in many ways, it is also people who have the ability to protect the river for future generations.  Once, sections of Pitman Creek near Campbellsville were practically devoid of fish life due to pollution by dyes and heavy metals from a local industry.  When this stress was reduced and eventually removed many species of fishes returned.  Through the efforts of many, an underground stream at Horse Cave once regarded as an open sewer now is home to a museum.  The site is now a popular tourist attraction where visitors can see aquatic cave life prospering once again.  Around 1960 the oil boom in Green, Hart, and Metcalfe Counties resulted in petroleum and brine being flushed into many streams.  Some of the small streams were virtually killed out.  The effects of runoff from Green County were felt all the way to Mammoth Cave.  Many of these streams, thankfully, have recovered to some degree.  Even though she is resilient, it is hard to predict the ultimate effect of these cumulative stresses—not only on the fish and wildlife but also on the water quality, which affects us all.  I interpret her message to be that if given a fair chance she will continue to provide for us the various benefits we have come to expect and perhaps have taken for granted in the past.

Okay, so the Green River doesn’t really speak.  Maybe she actually depends on us to speak for her.  Yes, her people are her voice.  But imagine for a minute if she could speak—would anyone listen? 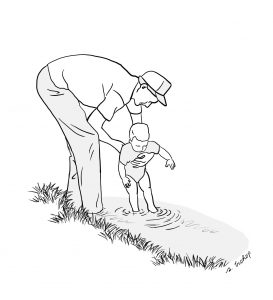 his grandson to Russell Creek for the first time. (drawing courtesy S. Bishop)